Broadcaster bursars bring back new ideas from their trips

This year we helped eight employees from our member broadcasters to exchange ideas and skills in other countries, as part of our travel bursary programme. Over the course of June, producers and managers from Bangladesh, Canada, India, Jamaica, Namibia, Nigeria, Trinidad & Tobago and the UK benefited from short visits to member broadcasters around the world.

Golam Shafiuddin, Deputy Director-General of Bangladesh TV, received an in-depth appreciation of multicultural programming at the ABC and SBS when he visited Australia. He took back ideas to his station such as developing an audience research unit, and an advisory council with thinkers on society and culture to create more dynamic and people-centred programming. 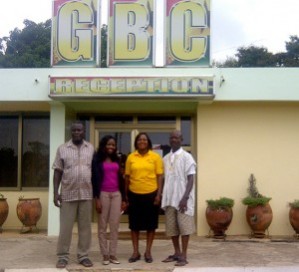 Will Ibong, a radio producer and presenter from Voice of Nigeria, is back from her trip to Ghana. Will (pictured second from left) is currently putting together a programme based on her observations on female empowerment projects in Ghana, for Femmes, a bi-weekly show she produces for her station. The 15-minute feature-format programme focuses on women and their role in society.

Meanwhile in Trinidad & Tobago, Andy Sieupresad, Group Digital Media Manager at the Caribbean Communication Network has brought back detailed insights from his visit to the CBC in Canada. He came back with enriched understanding of marketing aspects such as online and TV content sales, audience research and syndication.

Conversely, CBC also had an employee travel out of Canada. Jillian Taylor, a reporter and editor for the CBC Aboriginal unit, visited counterparts at SBS and ABC in Australia. Jillian, from the Fisher River Cree Nation, found solidarity with Australian Aboriginal journalists in combating stereotyping and racism in news coverage. She said the trip made her realise her responsibilities as an indigenous journalist, and she is planning a guide on reporting Aboriginal issues.

Albertus Aochamub, Director-General of the Namibian Broadcasting Corporation, was able to have fruitful meetings on his visit to the UK with key BBC personnel to learn more about national and regional programming, and gave an inspiring keynote address at the CBA Conference – representing African broadcasters and discussing their key challenges.

Marilyn Facey from RJR Jamaica is in the process of putting together a radio documentary on male educational underachievement for her station, after her visit to Barbados, having conducted numerous interviews with gender and education specialists, as well as young people themselves.

Usha Bhasin, Channel Head, Arts and Culture, for India’s public service TV network, travelled to the UK to meet with BBC broadcast heads, and network with other PSB directors at the CBA Conference. One of the meetings provided the inspiration for her to plan an ‘untold story’ primetime special for Doordarshan about the HIV/Aids awareness TV programme Jasoos Vijay.

Lastly, BBC radio journalist Siobhann Tighe was able to help staff in news, sports and the commercial section of Radio Cayman with practical workshops to improve their radio presentation skills, both in terms of writing and delivery.

Our thanks go to the Elizabeth R Broadcasting Fund and Grace Wyndham Goldie (BBC) Trust Fund for funding the Travel Bursaries this year.

This entry was posted in Latest and tagged travel bursary 2014.

This site uses cookiesFind out more